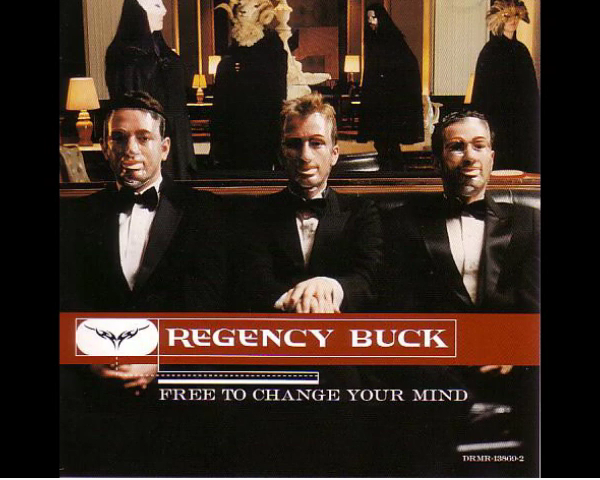 Pre-Order “Deliverance” today. Click here to check it out.

Released April 2, 2002, the album was recorded by keyboardist-drummer-singer-programmer Dave in the downstairs bedroom of the Glasgow house he shares with Paul. Mark “Spike” Stent (Depeche Mode, Björk, Massive Attack) served as mixer.

What does Regency Buck say about their tracks?

“Free To Change Your Mind (Deliverance)”: Paul: Somebody once described the chorus as “dark clouds over Ibiza.” I told some journalists in Britain that it was about brain transplants, but I don’t think they got it.

“Monkey Girl”: Christian: I was in a hotel in Germany with this girl who was part of the entourage of a different band I was touring with. We were going to get it on and as we’re lying in bed she goes, “Hang on a minute; I’ve got a surprise for you.” I’m thinking, “Ah, nice one.” She disappears into the bathroom – to put some lingerie on, I imagined – and comes out five minutes later dressed in a full gorilla suit, with all the monkey actions, jumping about the room. I went, “Oh, right.” The song is actually a reflection on bizarre Internet love affairs that start up in one of those fetish chat rooms, where two people who like dressing up in monkey suits can get together.

“At The Disco”: Paul: Chris had a vision of priests and nuns dancing at a disco, worshipping God from the dancefloor. Christian: That’s about the disco generation and how they aren’t quite sure how long they’re going to be able to keep taking their pills. At the same time, though, they find their inspiration and their souls are totally entwined with the whole disco culture. I was thinking about something a friend said – “How long do you think we can keep this up? Sometimes I wonder.” He’s still going.