InternetDJ Tutorial: The Mix vs. The Master 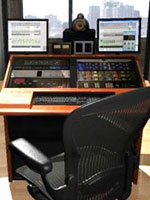 First, the easy one: MASTERING . Mastering is a post-production process which is generally done by professional mastering engineers. The purpose of mastering a track is to make it sound proper across a variety of audio output devices. More mastering history can be found in this Wikipedia article. The key thing to take into account as far as mastering goes is that it is generally done post-production and used to be a key process for producing top hit music.

And now for the elusive MIXDOWN : the mixdown is a term used widely in the electronica realm by producers which describes the process of aligning the musical elements on a particular track. The mixdown is a mid-production process.

With the rapid development in the field of DAWs more and more people are taking music production into their own hands. With advancements in technology and the internet it has become easier for individuals to make and market their own music, and hopefully keep the cost down. And so, in order to make sell-able music, the adventurous emerging producer usually becomes very familiar with the mixdown process.

The mixdown is almost an art of equalizing and compressing the musical elements in a track to compliment, and positively interact with, one another. This process can involve, but isn’t limited to: channel volume, panning, stereo separation, compression, frequency filtering, and layering.

Have you ever heard a track on iDJ with a great melody, catchy hook, and sick bassline but something just seems a bit off and kills the whole track? Chances are, it’s the mixdown.

The following are some common mixdown mistakes I have heard on iDJ (and even some professional) tracks and solutions to those mistakes:

Issue: Melody synth clashes with the bassline and creates an unpleasant scaled out noise
Solution: Use an EQ tool on the synth channel and another on the bassline channel and filter out the lower frequency on the melodic synth until the bassline no longer clashes

Issue: The main body section sounds very cluttered.
Solution: If you are using several melodic synths at the same time, be sure to pan each one out slightly to the left and right so the sounds do not compete with output space, this will also give your track a slightly more alive feel. You can get very creative with panning and really spice up the atmosphere of a track.

Issue: One synth/sample is dominating everything else when turned on.
Solution: Generally a volume and/or compression issue. Check the volume level of the synth versus your other instruments and adjust compression/volume accordingly.

Tip: Choose your favorite professional track in the genre which you are producing and listen to it a few times. Then play your track and feel out what changes you need to make based on the professional track. This is one of the easiest and best ways to learn to portray the right kind of sound in your music.

Tip: The more complex and intricate the phrasing, the harder it will be to mix the track. Using several bass/percussive/melodic instruments at the same time will require proper compression and EQ work.

With technology really putting the majority of the production process into the individual’s hands and the advent of digital media clearly beings to blend the lines between mastering and mixdown.

Mastering is still widely used for many productions released by major studios, but the process is expensive and not one which an emerging producer can generally afford. A good mixdown can bring your production very close to professional sound and is generally an acceptable substitute to mastering for demos and EPs.

There are many topics in the iDJ “Production, Mastering” forum archives which detail specific techniques on mixing your tracks, a great place to start on your quest for better sounding music